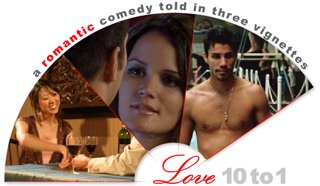 Somehow I've gotten this together, don't know how but Tuesday I was freaking out when I realized how much there was left to do; did I mention that I'm also wrapping up my job of the last 5 years. Today was my last day at work and Sunday is my first day of production.

So many changes all coming so fast, it's like I have no say in it, I'm trying to move at the same speed as my circumstances.

I am exhausted and I have so much to do tomorrow but I'm in capable hands; my boys are back, Brian, Casey, Frederick and my DP Matthew; then there's my actors, I'm so blessed to have such a talented and beautiful cast, and then ofcourse there's Lynn, my craigslist find and the best God send I could have. Lastly, there's Christine and Laura - I can't believe it's here!

We have a great costume designer that Laura found on Craigslist, her name is Natasha and she is a super pro. She is a super talented designer and her participation will help make the project better. I've come to realize that Craigslist is not just a place for trolls to hook up, you can actually find super cool people who want to work!

I am way too exhausted to finsh this. I'll keep you all updated.

Last night I attended the WGA's "Writers on Writing"--Judd Apatow was the guest speaker.   The moderator asked Apatow about his thoughts on reinventing the romantic comedy.  Apatow said that he didn't write Knocked Up as a romantic comedy--it was just received that way.   He really wanted to make a film based on his experience of being a first-time dad.  The evening ended with Apatow showing a clip from the "Walk Hard" DVD: a "cockumentary" with behind the scenes footage from the film, including a talking penis.  I don't know why that was funny but it was, I must admit. Though once in a while I wonder whatever happened to the witty romantic comedies in the 50's with Cary Grant and/or Audrey Hepburn?   Is there anything comparable today?
Posted by Christine at 12:09 AM 1 comment:

In Response to the L.A. Times Article

I saw the L.A. Times article and posted it on the Movies by Women blog, I meant to get it here too but Christine beat me to it. I was appalled by this article – really! I’ll direct a horror movie, give me one; I’ll direct an action movie, can I direct the next Die Hard?

Provided that it wasn’t taken out of content, below is the quote that made me want to go to Culver City and drop a pitcher of icy, cold water on Ms. Pascal’s face for no other reason than to wake her up

“Sony Pictures Co-Chairman Amy Pascal, who made Meyers' last two films, has Ephron's next picture and has hired more female directors than any studio head, says summer movies just aren't an area of interest for most women. "It simply may be a matter of self-selection, since most studio films are aimed at young boys," she says. "Look at my summer slate. I don't think there's a woman who would've wanted to have directed 'Hancock' or 'Pineapple Express.' "

Really, how about asking me, or Christine or Laura? As for summer films aimed at young boys, HELLO! You run one of the biggest studios in the world….

Big Kudos to Warner Brothers for hiring a woman (Sanaa Hamri) who is fairly new, to direct the one film aimed at teen girls this summer –The Sisterhood of the Traveling Pants 2.

I’m not one to bitch too much about these things, I like to create awareness for the problem and then work on a solution. It’s what my work with Movies by Women is about – positive, progressive change.

To tie it all back to Love 10 to 1 – no one was going to give Christine and I a chance so we put all our money into making this film and when we needed a third story we practiced what we preached and gave Laura a chance. We had a few offers from male writer/directors to pitch us the third story but because we had no one but ourselves to answer to, we offered the third slot to someone with talent, integrity and who we can get along with.

I’m getting ready to shoot – I promise I will blog about this.

Check out this L.A. Times article about the lack of women directors for studio films. Click on the title of this blog for link to article.

One excuse given is that women directors wouldn't be interested in directing summer movies, i.e., action, horror, fantasy, etc. Puleaze! Another reason is that women prefer not to be in charge on the set. Double puleaze! Is Hollywood the last bastion of sexism?
Posted by Christine at 11:06 PM No comments:

Behind the Scenes at the Sundance Labs

I promise to blog SOON - Many new developments coming this way!!!

In the meantime, check out this LA Weekly article - click on the title and it will link you there. 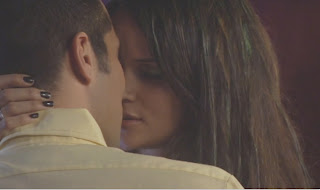 Our love10to1.com website should be up soon. It's taken a little longer but we're trying to add some some fun stuff to the site which has slowed down the process. During the process of getting the website up, I'm reminded of the importance of getting stills during production to use for publicity/promotional purposes. I was given this advice by a producer before we started production, yet even though we have a lot of pictures from some of the production days, there were other days where stills were sorely lacking. Ugh. We were able to get some "stills" from the HD footage, so this hasn't been a big issue. Still, stills are good to have.

On other news, Lucy will be starting production soon on her vignette. This is extremely exciting for us. Finally, the last piece of the trilogy will fall into place. Stay tuned.
Posted by Christine at 8:31 PM No comments:

The NY Times had an interesting article about the summer movies and how so few movies show women in lead roles nowadays.  Theories abound as to why this is the case.  Click on the title above for a link to this article.
Posted by Christine at 12:30 AM No comments: